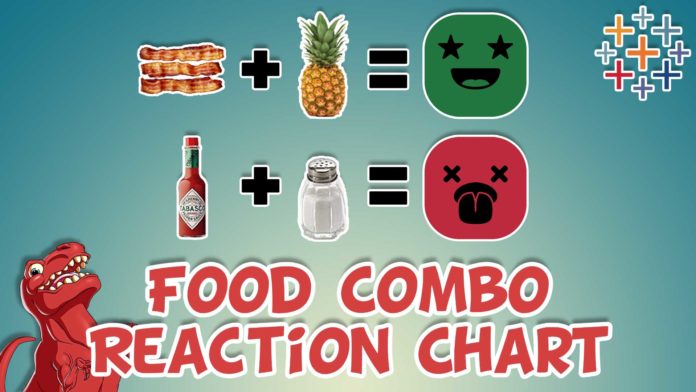 Food is a funny old thing – your body can handle all kinds of combinations of food when it’s in your stomach (fish, ice cream, coffee etc.) but the same can’t be said when it’s in your mouth and on your tongue. Which got me thinking…

In today’s data visualization I wanted to convey my reactions to combining and tasting 20 different pieces of food – all 190 combinations!

It wasn’t pretty, but it was a fun challenge to perform the research and also try and visualise a more qualitative value such as taste.

First I needed to collect the data, meaning I had to cook and arrange each of the foods and their combinations out so I could taste them. I then recorded my reactions on a scale of 1-5 using Google Sheets – as Tableau has a native data connector to it which is pretty neat.

Once that was done (I’ll upload a video of my reactions in the near future), it was a simple task of building the data viz in Tabluea Public. Check it out below and keep reading for some tips on how I made it.

The main things I wanted to leverage was the Viz in Tooltips feature. With Tableau 10.5 just released, I wanted to make good use of this new functionality. It does what it says on the tin, by allowing you to include sheets inside a tooltip, where you control their size. This allows you to present more information without taking up precious space on a viz or overloading the user. In this example, when you hover over each of if food combo icons on the table it’ll give you a nice summary of what was combined and my rating. I’ll write a post on creative ways to use this new feature soon.

I also had some creative uses for custom shapes and action filters/highlights to help with the UX and data exploration.

So there you have it – I hope this viz helps save you from a terrible combination of food or leads you to an unexpected amazing one! What’s the worst combination of food you’ve eaten? What other foods would you like to see in future expanded versions of this dashboard? Does coffee go well with anything? Let me know in the comments below!